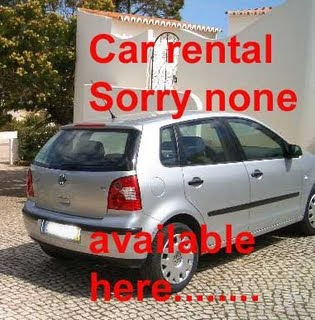 Simon Calder The Independent’s travel writer reported in the 8th August that there is a shortgage in Spain this summer. He told the story of a Mr Carl Whitaker who had booked “a pay on arrival” car with “DoYouSpain.com” and was contacted a couple of days before he was due to arrive in Palma Airport in Mallorca that no vehicle was available.

You don’t have to pay till you arrive, can cancel without penalty and according to their website “DoYouSpain.com is a company dedicated to providing you with efficient low-cost car hire services in Spain. We take pride in offering reliable and flexible services with our All Inclusive Price Policy with No hidden costs or last minute surprises.” Checking their conditions on the web, their was no reference to them cancelling, however I would presume further terms conditions would appear when a customer makes a booking.

Apparently Mr Whitaker tracked down an alternative car and the Renault Clio that was available would cost £843. In his original booking it was going to be £197.

Simon went onto check other popular Spanish airports for a weeks rental and also Faro airport in the Algarve, Portugal. He found a VW Golf at £751 which is around £100 a day and his research discovered no vehicles at Faro, Ibiza or Mahón in Menorca. At Málaga you get a VW Polo for £472 for the week.

In July in a headline in the jmlvillas.com group’s cotedazurrental.com “Travel News” There was the story link for “Book your car hire early this summer - you might not get one at the last minute” reporting on a shortgage of cars at Nice airport in the south of France. Using Holiday Autos for a search I found cars in Alicante. Spain for a rental starting on the 12th August “ there was no problem, however who knows in a few days time they could be just as busy, so whenever possible try and book well in advance, particularly in the height of the summer”.


Back in October on the main jmlvillas.com main site In “Tips and Topics In Ireland 2008 onwards” there was a report about “car dealers are facing increased congestion on their forecourts. as a large number of Self drive car rental hire cars are returning to their forecourts to be sold/ 18.712 hire car vehicles were supplied to date in 2008 and the cars are being returned to be sold as "used cars. Apparently there are not so many hire cars in Ireland this year and on my visits to Ireland have seen several cars out on the roads that are operated by car rental that had 2008 and even 2007 registrations.

August is probably one of the busiest periods for car hire companies and if the economic situation improves next year then hopefully the car hire operators will have more stock again, however in the short term as Simon Calder points out in his article “Rental companies are making a mint from the hole in the hire-car market”.