Is there still a shortage of car hire vehicles in Europe? 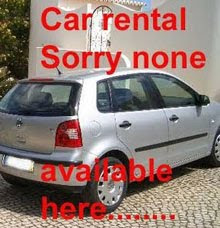 Throughout the main holiday season, particularly in southern Europe, it has been rather frustrating for those wanting to rent a car and unless the booking was made far in advance.

On this blog in July we ran a story entitled "Book your car hire early this summer - you might not get one at the last minute" It tells the story of some regular visitors to Nice in the south of France who had not booked in advance and when they arrived there could only find luxury cars available like an Audi TT.

These types of cars do tend to be rather expensive to rent, if all you want is a small Citroen with air conditioning.Then on this site on the 10th August we ran an article "Shortage of Car hire vehicles in Spain". This was following Simon Calder's article in The Independent's travel pages about a visitor who had booked “a pay on arrival” car with “DoYouSpain.com” and was contacted a couple of days before he was due to arrive in Palma Airport in Mallorca that no vehicle was available.

This renter did find one in the end however and found a Renault Clio that was available and would cost £843. In his original booking it was going to be £197!Simon Calder also researched other airports and discovered no vehicles at Faro in Portugal, Ibiza or Mahón in Menorca. At Málaga you get VW Polo for £472 for the week.Following on from this we ran a story "Where have all the car hire rentals gone?" on our insurance4carrental.com site. The story outlined the problems of the summer where Car rental companies were saying they have not been able to buy enough vehicles because of a fall in manufacturing and tighter lending conditions.

Car hire broker Holiday Autos Managing Director Stuart Nassos was saying that the shortage was blamed on shortages in the recession as car manufacturers have cut the number of cars being built, therefore fewer are available and also there is a lack of credit. The two combine to create a perfect storm. He suggested that advised holidaymakers should not rely on an airport booking, which may be cancelled at short notice, but to book a car from a city location.Last month on the insurance4carrental.com site we featured a report entitled "car hire vehicle shortage predicted for September 09".

This was about an article by Harriet Meyer of "The Observer" saying that there will be a shortage of hire cars in European hotspots and steep price rises may cause problems for travellers into September.Our story also took into account northern Europe as we had asked a car hire company in northern Europe on how they had got around the problem of not having enough cars in the height of the summer and they had replied that they had put up prices and this had solved the problem.So there were predictions of problems running into September.It would be interesting to know if this actually happened and has it continued into October by adding your comments in the box on the right "add your comments here".

I look forward to hearing from you and it will be interesting to see if there are more cars about again in 2009.
.
Posted by Philip Suter at 23:53

Nice to come here and know some useful information. Thanks for that. Neha Parikar