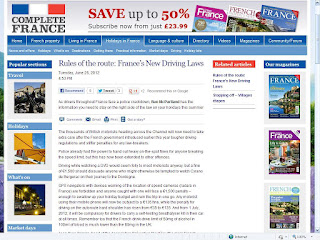 Just had an email from France Magazine one of the specialist magazines about France. We used to advertise jmlvillas.com and jml-property-insurance.co.uk in this publication for many years up till 2010. Like other similar magazines it is full of topical information for visitors to France and what could be more topical than a feature on the new driving laws.


Well written by Ben McPartland it covers  the following:


GPS navigators with devices warning of the location of speed cameras (radars in France) are forbidden and anyone caught with one will face a €1,500 penalty . Make sure your SatNav does not get taken away.


Any motorist using their mobile phone will now be subject to a €135 fine - will be interesting to know if this actually will put people off. In the majority of European countries motorists will automatically put on their seatbelts, but still use their hands held mobile whilst driving which is very dangerous.


The penalty for driving on the autoroute hard shoulder has risen from €35 to €135.


Bens's article reminds us that as from 1 July, 2012, it will be compulsory for drivers to carry a self-testing breathalyser kit in their car at all times. We have featured this on this blog site twice recently, latest time on the 7th July with  "Update on Breathalyser kits in France"  These must be kept in the front of the car in the glove compartment.

We are reminded quite wisely that the French drink-drive limit of 50mg of alcohol in 100ml of blood is much lower than the 80mg in the UK. So many people are probably thinking they are away on holiday, out to restaurant three glasses of wine and you will be over the limit.

Speed cameras: In 2011 speed camera fines generated €630 million for the government, which earlier this year announced that a further 500 cameras were going up around the country. They are growing quickly, just like they have done in Britain. They don't always look like the old style ones and they are now not always adding the warning signs (on left) so take extra care.
Remember the following: It is now possible because of a recent European Union directive that has been adopted which now means it is possible for one EU member state to prosecute foreign nationals who have been caught committing driving offences.
If you are driving your own car have the registration and insurance documents with you at all times.
Carry your driving licence with you, be it that you are driving your own car or a hire car.

Stop signs! – Stop means just that and failure to halt before the sign can result in an on-the-spot fine, yes they will do this!

Warning Triangles and Reflective Vests - Must be kept in the interior of the car, not the boot. It is a good idea to have two of these vests as you will certainly need more if you go into Spain.

My local car repair person has also reminded me that under French law you must have a spare set of light bulbs in the carand talking of lights if you are taking your own right hand drive car to France, dont forget headlight deflectors.
To read the article in full follow this link
Posted by Philip Suter at 01:04

It is great information for tourist .
We provide Online Car Hire Service at very less price.

This is really interesting. Thanks for sharing.
Property for Sale Morzine