Last weekend's "Cyprus Weekly"  reported that the number of rental cars registered between January to April 2013 dropped to 332 from 614 in the same period in 2012.

Meanwhile I have just rented a car from Sixt Cyprus rent a car and their partner Uniwheels Car Rentals Ltd via Economy Car Hire for a week from Paphos International Airport in Cyprus.

I was sent an email a few days before going from Economy Car Hire saying "Your booking was made without purchasing the optional top-up insurance. £14 will make sure you are covered. Our enhanced top-up insurance policy provides cover against any loss or damage to the vehicle which is not covered by the car hire company. This includes the following: Damage to the tyres, windscreen, underside of the vehicle and the interior.

The cost of replacing lost, stolen or damaged keys, including replacement locks. Cover of up to £500 in the event the wrong fuel is put into the hire vehicle. Up to £100 can be claimed should the hirer unintentionally lock themselves out of the vehicle. You can add this additional cover to your car hire booking for just £14. This is a reimbursement insurance which means that any loss or damage must be paid for at the time of the rental and a claim must be made against the policy for reimbursement."

The service from Sixt at Paphos Airport in Cyprus was very good, their representative told me that they have a lot of dealings with Economy Car Hire   and as I was concerned about many car hire companies in Cyprus have a collect full, pay for a full tank of fuel and return empty new that with Sixt it was pay for a full tank and return full and you are refunded the amount you paid.

It looks like the only extra was the airport collection tax charge which according to the calculations on my credit card statement was £15.46. The Ford Fiesta was OK for our needs, however after driving a few kms, the top part of the gear lever fell off. Not a real problem as I soon knew which was reverse. 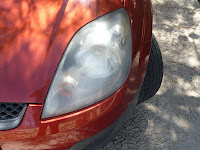 Driving at night was not so easy. The lights looked like they were all misted up and trying to clean the dirty windscreen, I found the spray jets on the bonnet blocked as the water bottle was full. I also found out that the near side headlamp did not work on dipped.

On returning to Paphos Airport I reported these issue to the friendly Sixt Cyprus person who was also the same person who had provided all the rental documentation at the check in desk the week before. He told me that the glass was misted up due to the sun in Cyprus, but at looking at other cars in the week it seemed rather strange that it only happened with this one. Hopefully they fixed the spary jets for the front windscreen wipers and put a new light bulb in and stuck the gear lever indicator on properly before the next rental.

I could not find a fuel station at the airport and fortunately filled up at the last one I saw before going to the airport, some 6 km or so from it, so if you are intending to return a car full of fuel


If you are thinking of taking a self catering holiday villa rental in Cyprus follow this link to the jmlvillas website
Posted by Philip Suter at 05:56