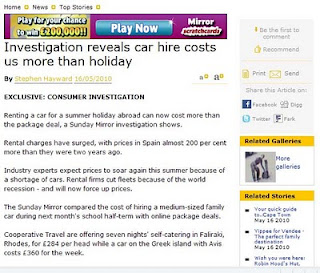 Rental charges have surged, with prices in Spain almost 200 per cent more than they were two years ago."

Industry experts expect prices to soar again this summer because of a shortage of cars. Rental firms cut fleets because of the world recession - and will now force up prices.

The Sunday Mirror compared the cost of hiring a medium-sized family car during next month's school half-term with online package deals.

Cooperative Travel are offering seven nights' self-catering in Faliraki, Rhodes, for £284 per head while a car on the Greek island with Avis costs £360 for the week.

On Spain's Costa Brava, a week's bed and breakfast with Bookable Holidays is £278 per person, while a car costs £300 with Nationalcar. At Alicante, Spain, the daily car price has jumped from £16.50 to £31.

Gareth Robinson of carrentals.co.uk, which tracks the cheapest deals, said: "The recession has had a major impact with hire firms unable to increase the number of vehicles due to lack of funding.

"A limited supply of cars has restricted availability and seen prices increase - a trend set to continue this summer."

There was a hire car quote in Crete for example with the dearest car hire deal being an Opel Astra at Avis Costing £361.12 or cheapest being a Ford Focus at Alamo Costing £205.49

There were numerous examples and the Sundat Mirror article suggests where to get the best deal from:
You can save hundreds of pounds on holiday car hire by shopping around.

No one car hire firm or buying method - phone or online - is consistently the cheapest or the most expensive.

Comparison websites such as travelsupermarket.com and carrentals.co.uk are good for finding the lowest prices.

But brokers such as Holiday Autos ( http://www.holidayautos.co.uk/cgi-bin/liveweb.sh/QSearch.w?ctryref=GBR&lang=EN&aff=xjeffreymilnerltd ) and Holiday Cars Direct also offer reasonable deals by negotiating rates with car hire companies. Airlines and tour operators can also be a good bet as they usually have an agreement with one of the international car hire firms.

You can sometimes get a cheaper deal through links on their websites rather than contacting hire firms direct. But these prices are still unlikely to match those on cost comparison websites."

The article went on to mention car hire insurance, a popular topic on this blog. "The biggest bugbear for drivers hiring a car abroad is all the pitfalls associated with insurance.

Extra insurance known as excess waiver is essential if you don't want to get stung for a tiny dent.

Most hire fees include basic insurance. But you should also say yes to the excess waiver, likely to be £5-£10 a day. If you are offered this when you pick up the car, check you haven't already paid for it via a separate policy with your UK supplier, often much cheaper. Airport reps often try to sell you more cover regardless of what you've arranged at home. Daily and annual policies are also available.

That should allow you to claim back any excess should you damage the car.

Rochelle Turner of consumer group Which? said: "Check the extra waiver covers you for everything. Some won't cover the windscreen, wheels, tyres, roof or underside of the car."


No individual providers were quoted, but by following this link http://www.insurance4carrental.com/#Click There are a few to choose from here.

Could we be in for another summer of car hire shortages as last year? It is sensible to book early so at least you can guarantee the price and car. One car hire representative told us last August that the way they got round the shortage of car hire vehicles was to put the prices up! We don't want too much of that this year, thanks.

I would like to ask how much would it cost me rent a car just for 2 days. please let me know. I need a top down unit. Thanks a lot and more power to you!