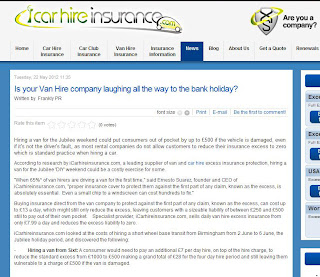 Posted by Philip Suter at 08:35 No comments: 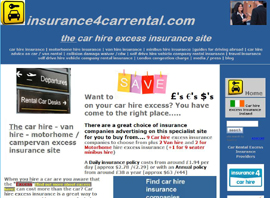 There is also a choice of car hire companies and an insurance company advertising that provides vehicle hire insurance for those have a fleet of rental vehicles.
With the summer weather at long last here (how long it will last is a different question), now is the time to make arrangments with Royal celebrations and Olympic Games in the UK and Euro 2012 football in Poland and Ukraine.

More information at www.insurance4carrental.com
Posted by Philip Suter at 08:34 No comments:

Hiring a car for the Jubilee weekend?

﻿ ﻿ There is just under three weeks to go to the celebrations between the 2nd June and 5th June of the Queen’s Diamond Jubilee. Events are being held throughout Britain with street parties galore and as it is an extended bank holiday, many people will be taking a longer break as well.


If you are hiring a car don’t forget your car hire excess insurance. There is a lot going on at the insurance4carrental.com site now. Apart from the choice of four car hire companies. One company currently celebrating it’s 25th birthday – Holiday Autos plus Carrentals, Economy Car Hire and Rentalcars. You can also arrange Motorhome hire and Van hire via Holiday Autos.


Buying your car hire (or van or motorhome hire) excess insurance is a lot cheaper by buying it direct from one of the advertisers on the insurance4carrental.com site than from an individual car hire company so most of these companies say.


So who are these companies advertising on the insurance4carrental.com site?

For the motorhome hire business there is Worlwideinsure and Questor Insurance. Van hire excess insurance is covered by insuremyvanhire.com (part of insurance4carhire group) and iCarhireinsurance.


Finally for 9 seater minibus hire there is iCarhireinsurance. Hopefully other insurance companies will enter that part of the market and for slightly larger minibuses.

If you book your car hire now you should ensure there are vehicles available. After visiting one car hire depot yesterday in the south of England you never want to leave it till the last minute. They only had 3 rental cars and 1 rental van on the premises.


Plan ahead for the weekend and also buy your excess insurance in advance.

Some helpful tips from Insurance4carhire before you go on your trip

A friend of mine is hiring a car later this week and bought car hire excess insurance from insurance4carhire.

He has just sent me an email from the company offering a few tips for his trip.

They suggest the following:

British licence holders should note that many car hire outlets will not release the rental vehicle on sight of a photocard driving licence without also seeing the paper licence counterpart.

They may also ask to see the paper licence counterpart of all named drivers.


The person renting the vehicle must have a credit card. Most car rental companies will not accept debit or switch cards, or cash.

Excess - What to Do


We cover Excess on CDW and Theft as well as damage to: undercarriage, roof, windows and tyres. Decline the car rental company's Excess at the counter. You do not need to show them your policy.

If you have any damage to the vehicle you will be charged, and then you claim for reimbursement.

You should notify our claims management company within 31 days. Your Policy documentation gives full details of how to claim.

That is allvery useful information for his overseas car rental.

If you are thinking of hiring a car insurance4carhire.com advertise their products on the insurance4carrental.com site.

By going through the insurance4carrental.com site you can save money as the Europe Annual £39.20 per year and  the Annual Worldwide Excess cover - 31 days per car rental agreement is only £52.00

For a short break or business trip take a look at Insurance4carhire's Daily Excess Reimbursement Insurance is £4.75 a day ideal for trips of 7 days or less More information Here

So if you are going away this weekend and renting a car, don't leave home without your car hire excess insurance.
Posted by Philip Suter at 04:24 1 comment:

Holiday Autos is 25 years old this year and to celebrate their silver anniversary Holiday Autos is launching a 25% sale on car rentals in some of its most popular destinations. 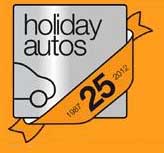 Celebrating 25 years of great value car hire, the 25% sale is a way to treat both long-standing and new customers alike to substantial discounts on car hire over the summer. With 25% off available on rentals until 31 October, you can make sure you don't miss out on saving money on those much needed breaks later in the year too.

The first week of the sale will feature popular family favourites such as Fuerteventura, Gran Canaria, Madeira and Malta, while those heading down under can take advantage of 25% off car hire in Sydney and Melbourne. Closer-to-home city breaks in Geneva and Toulouse will also prove value for money this week, and for those looking for something a bit different, car hire in Iceland's Keflavik will also enjoy the anniversary discount this Friday.

The car hire sale runs until 25 May so look out for announcements of further destinations!


The car hire sale launches on 1 May and runs until 25 May 2012, and offers all customers the chance to save 25% on all selected cars in different locations each day for an exclusive 24 hour period only.

Isabelle Ratinaud, MD of Holiday Autos says "We've seen a huge amount of evolution in car hire over the 25 years we've been in business and thought it was only right to celebrate with an extra special offer. Hopefully our anniversary sale will encourage more people to explore and enjoy their holiday destination this year, be it sunny beach breaks or cultural city getaways".

Full details of the sale, with a list of all sale locations and the terms and conditions applicable can be found at holidayautos