No car hire shortages in the summer of 2011 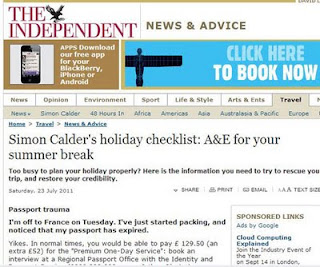 The Independent has just been delivered on the 22nd July and Simon Calder's travel page is preparing travelers (who have not gone off on holiday yet) for the last minute panic.

State schools in England broke up yesterday, (late as normal, however no one has missed out this last week with a very wet cold week in mid-July in the south of England)

One of the many subjects he has included in his "A&E for your summer break" is about Car Hire.

"I haven't yet booked a hire car, and a colleague says that there's a shortage of rental vehicles that's pushed up prices. Is he right?

No, not this summer. In 2009, the credit crunch led to a big shortfall, which pushed up prices to three or more times the normal prices. There was also the odd squeeze last year. But when any travel enterprise is seen to be making excessive profits, rivals pile in with loads of capacity hoping to cash in – only to see prices fall. Checking Holiday Autos for prices for the first week in August: an Opel Corsa costs £135 at Alicante airport, which is less than £20 a day. Florida is equally cheap."

"Of the 180 destinations surveyed by, prices fell fastest in Ireland, where prices have dropped 51% to an average £125 for a week’s car rental. There are also bargains to be had in Gibraltar, (where prices fell by 35% to £195) and major Spanish destinations."

The article also covers such topics as passport out of date...what do you do? - Mobile phones - Rynair's luggage rules and travel currency.

The Independent is on sale today, however if you have missed buying a copy, see the aricle Here