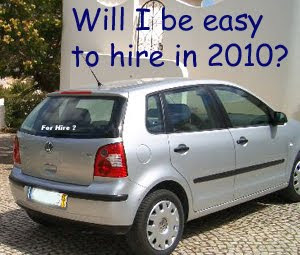 On Sunday the 11th October, “The Mail on Sunday” an article entitled Holiday car hire: Get the rental details right and avoid the chaos by the newspaper’s feature writer Fred Mawer. As with so many articles these days, advice on this blog and our website www.insurance4carrental.com he started the article with the words. “Car hire is something many of us put off sorting out until the last minute, long after we have booked our flights and accommodation.”
Mr Mawer went on to explain that In previous years, this hasn't been a problem because there have always been enough vehicles available in mainstream holiday resorts and, unlike with airline fares, rental costs haven't really fluctuated. But 2009 has been different saying that some holiday makers who had not booked early enough in Spain had ended up paying £400 per week to hire a small car.
The message very simply expressed by this Mail on Sunday journalist and others like Harriet Meyer of The Observer and Simon Calder of The Independent had been that you should book well ahead if you want to be sure of a hire car. It is easy to put this off to the last moment. You have secured your flights and villa rental, however something as straightforward as arranging car hire is left on “the things to do pile” near the bottom.
The Mail on Sunday’s article explained once again that the situation during the summer of 2009 came about because car rental companies operated with smaller fleets. Due to the current recession, car manufacturers are making fewer vehicles anyway and rental firms have been struggling to get credit from banks to purchase replacement cars.
As with Harriet Meyer and Simon Calder a quote was found by Car hire broker Holiday Autos Managing Director Stuart Nassos, saying “This year, car rental fleets in Spain have shrunk by 35 to 40 per cent and in Portugal, Italy and France, we've also seen fleet reductions of 15 to 20 per cent. As a result, at peak times - over Easter and during July and August - there was a shortage of cars and with demand sometimes outstripping supply, prices went through the roof. The situation in Spain was the worst”.
The article also quoted Gareth Robinson, Managing Director of price-comparison website carrentals.co.uk, says the problems look set to continue at periods of peak demand this autumn and winter. 'In winter-sun destinations such as the Canaries and Madeira, and at airports for skiing holidays such as Geneva and Chambery, at times I anticipate there will be a limited choice of vehicles and prices will be pushed up for late bookers,' he says.
Last week on the 6th October we posted a story on this blog site entitled Is there still a shortage of car hire vehicles in Europe? and it seems evident from Gareth Robinson’s comments that there will be.
Meanwhile Stuart Nassos of Holiday Autos is more concerned about next summer and has commented that 'It looks as if the challenging conditions may repeat themselves next summer, We're seeing many more people booking their car now for next summer than would have been the case in previous years.'
It is good to book several months ahead if you are one hundred per cent sure of your t holiday plans. We know that through our self catering villas site, www.jmlvillas.com that a local agent in the Algarve in Portugal has taken a lot of bookings for the summer of 2010 and is receiving a lot of enquiries.
The article ends up with an excellent plug for insurance4carhire.com by saying “Shop around for excess waiver. While rental firms quote rates including insurance against damage and theft, the cover usually comes with an excess - what you're still liable to pay in the event of an accident - running into hundreds of pounds. Rental firms let you reduce the excess to zero for an additional hefty fee, but even then you often have to pay for any damage to the tyres, windscreen or roof.
You are better off taking out an excess-waiver policy with a specialist insurer: it will be much cheaper and will cover damage to all parts of the car. See carhireexcess.com and worldwideinsure.com for cover from under £2 a day in Europe, www.insurance4carhire.com is competitive with its annual policies.
The article lists other cost saving suggestions as we have been saying recently like look out for those additnal charges like, additionaldrivers, child seats and even sat nav navigation systems.We are now into mid-October so with Christmas and winter holidays around the corner if you are hiring a car, you should make the arrangements as soon as possible plus arranging the car hire excess insurance.
Posted by Philip Suter at 08:56

I've just downloaded iStripper, so I can have the sexiest virtual strippers on my taskbar.