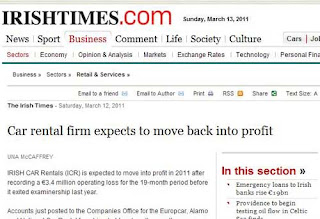 According to a report in The Irish Times 12th March 2011 "Irish Car Rentals (ICR) is expected to move into profit in 2011 after recording a €3.4 million operating loss for the 19-month period before it exited examinership last year. Accounts just posted to the Companies Office for the Europcar, Alamo and National Car Rental franchise-holder show the result came on turnover of €25.2 million.

The car hire company was placed in examinership in February 2010 and re-emerged in May 2010 after securing investment from the owners of the Thrifty car rental franchise."

On the 30th April 2010 The Irish Times reported "Irish Car Rental's board agrees to quit for investor" - A clear-out of the board of Irish Car Rentals Ltd sought as a condition of investment in the court-protected ICR motor group of companies has been agreed, the High Court heard yesterday.

The 2nd September Irish Times report went on to say "The €12.9 million pre-tax loss revealed in the recently filed accounts compares to a pre-tax loss of just over €4,000 for 2007. It gives an insight into the financial decline of the business in the years preceding the examinership process. Turnover increased in the same year, from €13.2 million in 2007 to €15.5 million in 2008"

View these Irish Times reports in full at:

Nice information shared here. We provides Van Hire Mayo, van rental services all about a fast, friendly service at an affordable price. Thanks for sharing.