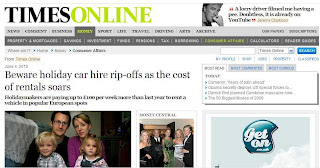 The Times ran an article on Friday June 4th 2010 called "Beware holiday car hire rip-offs as the cost of rentals soars - Holidaymakers are paying up to £100 per week more than last year to rent a vehicle in popular European spots".

Holidaymakers are being warned that the cost of renting a car has almost doubled in popular destinations over the past year, as car hire companies push up prices to counter the effects of the global economic downturn. (or is this because like in 2009 there are fewer car hire vehicles about and the car rental companies are controlling supply and demand by price?)

Renting a car this year could cost in excess of £100 more than it did in 2009, according to research by Holiday Autos, the car rental broker. (jml Property Services are Holiday Autos agents - http://www.jml-insurance.co.uk/index.php?id=12 )

Stuart Nassos, of Holiday Autos, says: “Car hire companies are struggling to access credit, so they are unable to expand their fleets or replace old vehicles. They are using the lack of supply to push up prices for customers.”

Travellers are also warned to look for extra charges, often hidden in the small print, which can push your final bill dramatically higher than the initial quote." (See Top tips for cheaper car hire)

The article went onto show ways in which costs can mount up as well like " The petrol scam" - Car hire companies should give holidaymakers three choices on petrol use: to accept the car with a full tank and return it full, to buy a full tank of petrol and return it empty or to pay for what is used during the rental period. Some companies insist on filling up the tank themselves and charging as much as 40 per cent more than pump prices"

Bob Atkinson, of the comparison website Travelsupermarket.com said "“Many Spanish resorts, in particular, now charge for a full tank of petrol on collection and customers are expected to return the car empty. During one week’s rental you may use only half a tank. That means that straight away you are out of pocket by up to £40, and the company will not refund you.”

This is something that used to happen (and possibly still does) with one car hire company in Ireland. They even had stickers in the car requesting the hirer returns the car empty.

In the The Times article Bob Atkinson says "if holidaymakers are not offered the option of filling the tank themselves, they should challenge the company. And if you have to fill the tank before returning the car, make sure that the petrol comes right to the brim. If car hire staff can squeeze in a few more litres they may hit you with a “refuelling charge” of up to £45. Keep the receipts whenever you refill and you can present them to the company as evidence when you return the vehicle."

On the same subject, however others have advised over the years, keep the receipts from your final payment - a) To prove that you have filled up the car with fuel and b) if challenged by the car hire company, you can actually prove that you have filled it up with the correct fuel e.g. diesel or unleaded in the correct tank not unleaded in a diesel car! What is more there have neen renters who have topped up the car with water, so keep receipts.

Other "add on charges" were featured. Stuart Nassos of Holiday Autos was quoted saying that some rental companies charge €15 (£12.50) a day to hire a child seat. Apparently most airlines allow passengers to carry them for free, Ryanair will charge £20 return which would work out cheaper and if you need to rent two seats from a car hire company this can prove rather costly. (See Car Rental Hidden Costs)

The next topic was the "excess insurance" The Times Report says "Hertz Car Rental, for example, sells excess waiver insurance during the booking process for £47.14 a week, while others charge as much as £10 a day. "Standalone" insurance products, sold by specialist insurers, can be a much cheaper option. ICarhireinsurance.com, for example, charges £23.94 for a week’s cover, or £39.99 for an annual product. If you work this out, fourtten days using the Hertz service quoted by The Times would cost £94.28 -using the ICarhireinsurance product would be £47.88. If you are taking more than one holiday a year, it really makes sens to take that annual policy and in fact for the two week holiday you would have a saving of some £54.29 and still be able to use that annual Europe policy during the next twelve months.

There are other providers offering car hire insurance from £1.94 a day at the insurance4carrental.com website

It is a very lengthy well researched article that quotes advice from the British Vehicle Rental and Leasing Association (BVRLA),Which the consumers organisation and Carrentals.co.uk

The article contains similar examples to that from the 30th May edition of The Mail on Sunday article "The Crafty Traveller: How to slam the brakes on runaway car-hire costs this summer" - An issue that keeps on coming up this year and raised in an article on the 26th May "Are there going to be car hire shortages again this summer "

This subject will not go away this summer, the media was full of the car hire shortage issue in the summer of 2009 and with schools breaking up at the end of the month in Ireland and Scotland amd mid July in England and Wales we will hear a lot more about holidaymakers incurring higher costs.

From personal experiences, even if you do book early, you still might not find cheaper car hire in the main holiday season. If you are planning a holiday from September onwards, like last year when car hire supplies returned to a nearer normal level, this year hopefully prices will come down again.

The car hire information is too elaborative I personally think that it is helpful for everyone. I appreciate for the writers efforts for this post.

Well the small car hire information on this blog is fantastic. I think this information is easy to understand. A big thanks to the writer for sharing it