New vice-chairman of the BVRLA 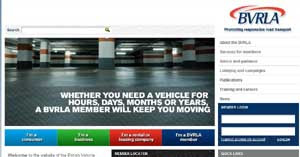 Neil Cunningham has taken over as the new vice-chairman of the BVRLA.(The British Vehicle Rental and Leasing Association)

Currently general manager at Hertz UK, Neil is now in line to succeed the association’s current chairman, LeasePlan’s Kevin McNally, when he completes his two-year term in May 2011.

An economics graduate from the University of York, Neil has a huge amount of experience in the vehicle rental industry, across the UK and in Europe. He joined Hertz as fleet director in 1996 before being promoted to his current position in 1998. Neil was responsible for the company’s entry into the car sharing market in 2008 with the launch of Connect by Hertz in London, Paris and New York.

“Having worked in the vehicle rental industry for more than 25 years, I have seen what a vital role the BVRLA plays in helping to maintain standards and provide a fairer regulatory environment,” said Mr Cunningham.

“I hope I can contribute to these efforts and continue the excellent work achieved by my predecessors.”

Elliot Lennick becomes the new vice chairman of the BVRLA Commercial Vehicle Committee. Elliot is chief executive officer of MAN Financial Services, where he is responsible for Northern, Eastern and Western Europe. In 2000 he established MAN Financial Services in the UK, where it now manages around 10,000 vehicles.

The new vice chairman for the Leasing Broker Committee is Martin Brown. Martin is the managing director of Fleet Alliance and has led the business from its inception in 2002 to one that has placed 8,500 vehicles today.

The new vice chairman for the Rental Committee is Alison Chadwick. Alison is director of regional operations for Thrifty Car and Van Rental and has experience of working for large multi-nationals and smaller independent rental companies during her 20 years in the industry.

More information about the BVRLA:
The BVRLA is the UK trade body for companies engaged in the leasing and rental of cars and commercial vehicles. Its members provide short-term rental, contract hire and fleet management services to corporate users and consumers. They operate a combined fleet of around 2.5 million cars, vans and trucks, buying nearly half of all new vehicles sold in the UK. Through its members and their customers, the BVRLA represents the interests of more than two million business car drivers and the millions of people who use a rental vehicle each year. As well as lobbying the government on key issues affecting the sector, the BVRLA regulates its members through a mandatory code of conduct.
Source: BVRA