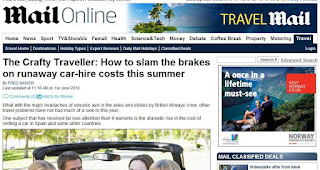 The "Mail on Sunday" ran an article on the Sunday 30th May 2010 on the dramatic rise in car hire costs this summer. This is an area we have been featuring a lot of on this blog and on the insurance4carrental.com site.
Following on from the chaos of 2009 when there was a great shortgage of car hire stock, it looks like the car hire companies are solving any shortage this summer by higher prices. This is a method used by one Irish car hire company last year, put up the prices.
The Mail on Sunday's article was called "The Crafty Traveller: How to slam the brakes on runaway car-hire costs this summer by Fred Mawer"

"What with the major headaches of volcanic ash in the skies and strikes by British Airways' crew, other travel problems have not had much of a look-in this year.
One subject that has received far less attention than it warrants is the dramatic rise in the cost of renting a car in Spain and some other countries."

The article is very similar in content to that in The Times on the Friday 4th June featured on this blog Car hire rip-offs warning "Beware holiday car hire rip-offs as the cost of rentals soars - Holidaymakers are paying up to £100 per week more than last year to rent a vehicle in popular European spots".

Earlier in May Fred Mawyer asked Holiday Autos - the UK's largest broker of hire cars - to provide rental prices for this summer in a selection of popular spots, and compare them against previous summers.

To rent an economy car for a week this July from Palma airport in Majorca, or from Alicante or Malaga airports on the Spanish costas, will cost you nearly three times more than in summer 2007.

Rates have also shot up in Ireland - from Dublin airport, by 75 per cent since last year - and there have been marked increases in prime rental spots in France, Greece and Italy. Of the destinations that Holiday Autos analysed, prices have remained stable only from Faro airport on the Algarve.

So why has renting a car in much of Europe become so expensive? 'Due to the recession, over the past 18 months car rental firms have struggled to obtain the finance to replenish their fleets,' explains Gareth Robinson, managing director of price-comparison website Carrentals.co.uk. 'As a consequence, they are operating with fewer vehicles than in the past.'

He says the problem is most acute, but not limited to, mainland Spain and the Balearics.
'At the same time,' Gareth adds, 'the firms have recently adopted a yield management model of pricing, similar to that used by airlines. This means prices go up significantly for rentals during peak times such as July and August, when the stock of available cars dwindles. It's a classic example of supply and demand.'

The Mail on Sunday article then went on to give advice on how to cut costs - Booking Ahead - Go Larger (in other words rent a larger car there are more of them) Shop around - Excess waiver insurance ("Rental companies often offer to reduce the excess to zero when you're going through the paperwork at the rental desk, but for an exorbitant charge - £10 per day.

Far cheaper are separate excess waiver policies sold by specialist insurers. These can cover you for a single rental, or for a number of rentals over the course of a year.") Find out more Here at the insurance4carrental.com site - Hidden extras (like child seats, second driver) and finally don't rent at all (Take your own car if possible - not so good if you are travelling to the Greek or Spanish islands or take taxis).

The full Mail on Sunday article can be found Here

you are given right information but A van is a handy vehicle to have if you have a large group of people in our possession.